[As I was talking with my husband about how to communicate all that has happened at and since Annual Conference to our church, Greg offered to write this week’s blog from his perspective.  So below is his factual, lawyerly, and analytical interpretation of events in the past 2 months in the United Methodist Church   It comes to you from a clergy spouse, a lawyer, a lay person, and a United Methodist Conference Chancellor.  At the end are a couple of links I thought might be helpful for you to explore further.  I pray that this helps explain the ever shifting United Methodist landscape this year.  Grace and Peace, Lory Beth]

Summer traditionally means beaches, cookouts, homemade ice cream, bee stings, and if you are a Methodist, it means Annual Conference. Tucked away in the hills and valley of Lake Junaluska, our annual conference was held from June 20 through June 23.

Boone UMC sent 5 lay delegates and 2 district delegates this year:  JB Byrch, Kaley Conner, Doug Kaufman, Chris Laine, Mary Pergerson, Dan and Colette Krontz. I found myself apologizing to them every so often because voting years can be painful and this was a voting year. The biggest and most time consuming task for our Boone UMC delegates was electing clergy and lay delegates to the 2020 General and Jurisdictional Conferences.

Context is critical to understanding what happened at our annual conference this year and why.  Obviously, our denomination has two factions actively at odds with one another, largely involving LGBTQ issues.  We have applied labels from our own secular politics to them:  the conservative “Traditionalists” and the centrist/liberal “Progressives.”  Frankly, neither of these labels make sense.  More on that later.  But, as in the past several years, LGBTQ issues took center stage.

After our conference wrapped, there were a number of blogs, Facebook posts, etc., floating about with information on Annual Conference but without any context or that were just plain misleading or inaccurate (from both ideological camps).  None of what happened this year can be understood without the proper context.

Full disclosure.  I was a lay candidate for General Conference and was elected on the second ballot.  I am also the Conference Chancellor, meaning I am legal counsel for the Conference and the Bishop.  While I am not active in or part of either the Traditionalist or Progressive groups, I was endorsed by a group of Centrist/Progressives in the election process. 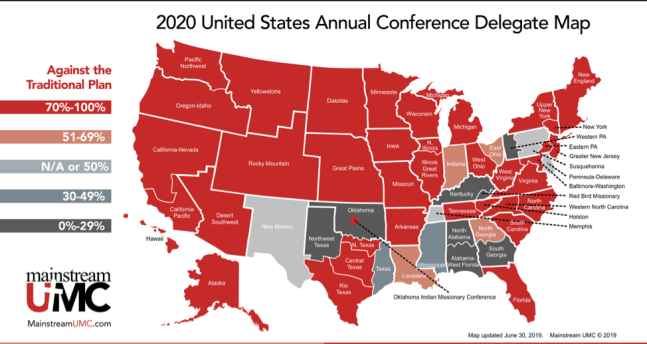 There are 54 annual conferences in the United States. Our conference, the Western North Carolina Conference, was one of the last of the 54 to hold its annual meeting. After the turmoil of the 2019 Special General Conference regarding the Traditional Plan and dissent regarding LGBTQ issues, both the Traditionalists and Centrists/Progressives launched highly organized voting campaigns to elect candidates for General Conference 2020. That played out across our denomination in every annual conference this summer.

The voting results for the U.S. church:

Our own conference elected a 100% Centrist/Progressive delegation (except for three Traditionalist lay alternates).  This applies to both the lay and clergy delegations for both General and Jurisdictional Conferences. However, we were entirely within the mainstream of the voting pattern of the U.S. church.

Some blogs and social media posts made it sound like the WNCC had gone wildly rogue.  Nope. We did not.  Those authors didn’t provide the overall context.

Our own clergy and laity voted squarely with the vast majority of the U.S. church.  You know, those hot beds of wild-eyed liberalism like Utah, Wyoming, Arkansas, Tennessee, Iowa, Kansas, and Missouri.  They all voted for 100% Centrist/Progressive delegations, as did South Carolina, Virginia, Michigan, West Virginia, Florida, Wisconsin, North Dakota, South Dakota, Colorado, Arizona and Nevada.  You get the point.

Why did I say that secular political labels like “conservative” and “liberal” don’t totally make sense in the context of the UMC? Simply overlay a 2016 presidential state voting map over a state map of our denominational elections.  They don’t match up geographically in terms of red state/blue state at all.

The voting trend itself reflected two realities:  math and organization.

The majority of American UMC clergy and laity are not evangelical conservatives.  UMC laity in the U.S. is very middle of the road or lean toward “Progressive” or do not identify with either the Traditionalist or Progressive camps.   How do we know this?  Earlier this year (before the 2019 Special General Conference), United Methodist Communications conducted an online poll of laity in the U.S.  The results indicated that 44% of respondents identified as conservative in theology, while 48% identified as moderate or liberal, with 8% not clearly identifying with either faction.  In answers to specific theological questions, the results indicated that the unidentified block tended to align with the moderate/progressive block. So, that 8% trends to centrist/progressive on issues.  Your 48% becomes 56%.

Online polling can be highly suspect because the pool has to opt in and those respondents tend to be a more motivated group of respondents with more of an agenda than you find in the general populace. It is easy to have sampling problems with online polling.  And, as in any poll, the results are only as good as the question. The questions in the poll were very broad, open ended, vague and theological in nature.  They are not issue oriented.  The poll did not gauge Traditional Plan or One Church Plan support, and it did not gauge LGBTQ issues.  I’m a bit of a closet political junkie, have a degree in Political Science, worked on a couple campaigns, and spent years helping large apparel companies construct surveys for competitive ads, and I did not personally think the polling questions were very good questions and they certainly were not designed to gauge the state of the U.S. denomination on specific issues.  While the poll is useful in showing that a substantial majority of the U.S. laity is not conservative but  rather leans centrist/progressive, the poll got something wrong.  It did not accurately gauge the extent of moderate to progressive lean of the laity in the U.S. It undercounted it.  By a lot. How do we know that?  Look at the recent election results.

However you slice it, combining laity and clergy, the math has always been against the Traditionalist camp in the U.S., but not internationally.  Historically, the Traditionalists have been more organized that the Progressives. This year was the first time middle of the road folks and progressives (clergy and lay) simply organized. The results were wholly predictable.   It made the difference this voting cycle.

So, no, your annual conference has not lost its mind and gone off on a left wing tangent.  What happened in the WNCC is what happened everywhere else because that is the state of our church in the U.S.

The effects of the Centrist/Progressive organization spilled over into a series of petitions passed by our Annual Conference.   UMC church law divides petitions into two categories:  aspirational (which don’t require you to do anything and which merely express an opinion) and prescriptive (which require some sort of action, like spending money on a certain item or submitting legislation to General Conference).

One of the petitions passed by the WNCC called for aspiring to the four commitments of UMCNext, a group of Centrist/Progressive Methodists (clergy and lay) working on a new vision for the UMC.  My wife, Lory Beth, was one of 11 signatories, all the members of UMCNext from the WNCC.  The petition lifts up the Methodist Wesleyan Quadrilateral of using scripture, tradition, reason and experience in our understanding and discerning of God’s will as well as our call in our baptismal vows to resist evil, injustice, and oppression in the many forms it exists in our world.  The petition also rejected the Traditional Plan as inconsistent with the gospel of Jesus Christ and pledged to work within the UMC to amend the Book of Discipline to make it more equitable for LGBTQ persons.  The petition passed with 63% of the WNCC voting in the affirmative. Again, the petition was aspirational. There is no direct implication for Boone UMC and our own operations other than an invitation to explore whether our church agrees or disagrees with the petition.  And other conferences passed the same or very similar things.

But there were prescriptive petitions passed that require our Annual Conference to submit legislation to the 2020 General Conference seeking changes in the Traditional Plan.   For example, Green Street UMC presented a petition seeking removal of statements from the Book of Discipline declaring homosexuality incompatible with Christian teaching.  It passed with 692 votes for and 481 votes against (58% in the affirmative).  So, later this year, our Conference Secretary will submit the petition to the 2020 General Conference for consideration.

Were we outside the trend?  No.  The WNCC was squarely with the majority of the rest of the U.S. church.

But the WNCC was not only focused on LGBTQ issues. We passed legislation creating a child advocacy commission on the Conference level.  We changed the way clergy elections for General Conference are handled (clergy can now submit their names as candidates in advance of the election).  We also passed a petition seeking greater attention to gender issues in pastoral appointments.

At the end of the day, while the centrist/progressive voting swept the U.S. church delegations and annual conference petitions, the centrists/progressives have a lot of work to do if they wish to roll back the Traditionalist legislation adopted at the 2019 Special General Conference. They are still outvoted by the U.S. traditionalists and a coalition of delegates from Asia and Africa.  The margins will be a lot closer but not close enough best I can tell.  Progressive blogs and social media did not address this reality very much, but it is the reality.  Was a strong message sent to the international church?  Yes.  Will it make a difference?  Only time will tell.

But it is in the Jurisdictional Conferences, which elect bishops, that the impact of the Centrist/Progressive delegations will be immediately felt. Every Jurisdictional Conference will have a supermajority of Centrist/Progressive delegates.  The import being Traditionalists will have no influence over the election of bishops as they have had in the past.  Centrists/ Progressives will select bishops going forward.  Most likely, we will see episcopal candidates enter their names which are imminently qualified but who have sidelined themselves in the past because they could not have gotten past Traditionalist checkpoints. That will have deep ramifications for the U.S. church and its relations with the international denomination.

That is the raw context in terms of numbers and trends.

Annual Conference is not all politics and debate. The UMC is a connectional system. Over the years, you meet a lot of people and hopefully make new friends from across the Connection.  You see church members, pastors, who you started a journey with and who are now way older than they were when you started. You honor the memory of clergy who have passed away, their spouses, preachers who were giants in their day.  You recall all the behind the scenes dramas that every year at Junaluska holds.  You see the little kids you used to know, who are now all grown with their own kids in tow. Lots of history.  But this year, I was stuck in the present.  The most touching moment for me was closing worship. I got to worship with some of our Boone UMC delegates.  Doug Kaufman and I have played music together but never worshipped side by side.  I see Colette and Dan all the time but have never sung hymns with them.

You can crunch all the numbers, pour over percentages, but at the end of the day, it doesn’t mean a lot unless there is a church, the connectional system, that is still around to matter and make a difference in the lives of our people and their families.  That’s why understanding the Annual Conference elections matters.

Here is a link to the petition that was submitted at Annual Conference that Lory Beth was a signatory on : Petitions 2019

2 thoughts on “What Happened at Annual Conference?”